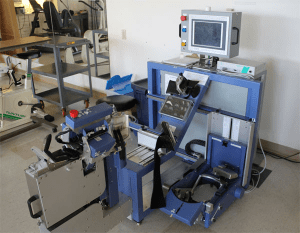 AMES is a device to support stroke rehabilitation. The system uses robotic assisted motion while causing tendon vibration to cause overstimulation of the limb’s proprioceptors. Proprioception is the body’s sense of relative position and functions as a response from the muscle being extended. In a stroke the closed pathways sensing and motor function are broken. Although the ability to stimulate the muscles is still there, the body no longer recognizes that movement has occurred and the ability to move is lost. The overstimulation of the proprioceptor function uses the neuro-plasticity of the brain to try to create new pathways to close the motor control and sensory path loop. STG was a founding partner of the business and engineering team to bring this technology to market.